According to the United States Bureau of Justice Statistics, burglaries in the United States increase by as much as 10% during the summer months when compared to the other seasons. Whether it’s more vacations, increased coverage from plants in bloom or individuals leaving windows open in the warmer weather, it’s impossible to deny the fact that your home is more at risk when summer rolls around. Stay one step ahead of the warm-weather bandits by thinking like one of them and shutting down any chance they might have. Here are five tips on how to think like a summer-time burglar.

1) Lock your doors all the time, not just at night. It’s a common misconception that burglars do most of their damage in the nighttime. While the cover of darkness may make for ideal entry and getaway, a 2015 New York Times article interviewing burglars in prison revealed the majority of crooks operate in the daytime. This is because a home is far more likely to be empty during work hours, specifically between 10 a.m. and 3 p.m. An empty home makes for a far easier target, and an unlocked door is an absolute jackpot for a burglar. So always lock your door when you leave your home in the morning, no matter how much of a rush you’re in.

(Forgot to lock your door? No problem! With smart door locks and our mobile app, you can check the status of your locks and lock or unlock them in real time. Never wonder whether you forgot again.) 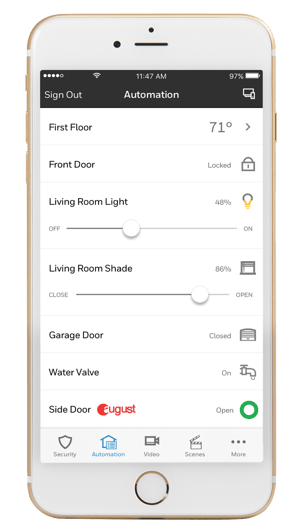 2) Take away those hiding places. Overgrown shrubbery provides quick and easy hiding spots for burglars. Whether they are using these spots to avoid detection while entering your home, or using them as perfect cover while they do research on your home, it’s a convenience burglars will consider when picking a target. Keeping a neatly maintained yard helps reduce this threat, and will make your neighbors happy to boot!

3) Consider what can be easily seen in your house from the outside. I know the interior decorator told you that your gold plated china looks amazing in the window display stand, but that’s a shiny invitation to a burglar. While it may seem obvious not to leave your prized possession right by the window, take into consideration everything else that can be seen from outside your windows. Is your laptop out in the open? What about your jewelry case? Anything of high value that a burglar can see while casing your home will increase the likelihood that they choose your house for their crime. Do a quick walk around the exterior of your home and note anything important that someone could see from the outside.

4) Social media can wait. While the excitement of your upcoming vacation is hard to hold back, save the tweets with all the details about your trip until AFTER you get back. This has become one of the easiest tricks in the book for burglars. According to the BoJ, 30% of non-violent burglaries are done by someone the victim knows. This means that posting about your vacation plans prior-to or while you’re on the trip gives a perfect tip-off to anyone with access to your social media. Don’t risk it, upload those pictures when you are back home.

5) Install a security system.  Can’t be too surprised by this one right? A security company recommending you install a security system. But the facts speak for themselves. The following numbers come directly from a study of over 350 convicted burglars conducted by the University of North Carolina Charlotte Alarm Industry Research and Education Foundation in 2012.

Not only does the mere presence of a security system greatly reduce your odds of being the target of a burglary, having an active, monitored systems will further lower the chance of anything being taken should a burglar set off the alarm. Throw in the home owner’s insurance discount you’ll receive following the installation of a security system, and this becomes a no-brainer.